What is a Reserve Game Warden?

By our current definition, it is a volunteer who supports the work of our game wardens. They are trained officers, often full time employees of other law enforcement departments.

Over the history of the Department, the use of reserve wardens went through many periods where the program was discontinued only to later be reinstated. One could say that it depended upon the whim of the existing chief of patrol to use or not use reserve wardens.

1892. The Board of Fish commissioners had 27 unpaid Deputy Patrolmen throughout the state.

DIRECTORY OF DEPUTY PATROLMEN,
STATE BOARD OF FISH COMMISSIONERS, WHO SERVED WITHOUT PAY

1912. By 1912, the Commission still had a staff of 73 paid game wardens throughout the state and approximately 400 unpaid Special Deputies.(AKA Reserve Wardens by any other definition.) I have yet to determine how many special deputies there were prior to 1912.

1927.  There was a major reorganization this year with the creation of a new Patrol Bureau. Special deputies (volunteer deputies) were assigned to assist regular wardens in their duties and empowered with the authority to make arrests for violations of the fish and game laws. The Commission decided to pay the new volunteers a salary of one dollar a year. As noted in the Biennial Report of the Fish an Game Commission, 1926-1928, “Under the provisions of the law as amended in 1927, the Commission has appointed 796 volunteer deputies. The appointment of 449 of these deputies was sponsored by bona fide fish and game protective associations and clubs located in various sections of the state, and the appointment of 347 was sponsored by the United States Forest Service.”

In February, 1928, the Commissioners issued an order making it obligatory upon the members of the Patrol Bureau to wear uniforms. A dark olive drab color was recommended and adopted. The uniform is required to be worn at all times except in extreme cases where it might be too conspicuous to violators and when working in very rough or wet places.

New badges were issued to the volunteer deputies to replace the many different styles and patterns. It assured uniformity and an equal dignity throughout the volunteer forces.  The badge that these volunteers wore is pictured below. 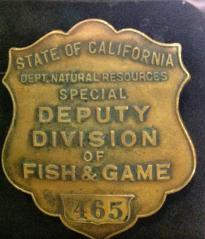 *Among those volunteer deputies was the first female volunteer deputy, and the only one that we know of, Mrs. Walter B. Skinner (Sellmer), in Fairfax, Marin County.  She worked as a volunteer in 1927 & 1928. Unfortunately we don’t have a photo or any other info.

That badge was replaced with a 6 pointed badge that was similar to the Game Warden Badge. It was in use until approximately 1951 when the Division of Fish and Game became the Department of of Fish and Game. You can see the “R” at the top of the badge that signified that it was a Reserve Warden badge. 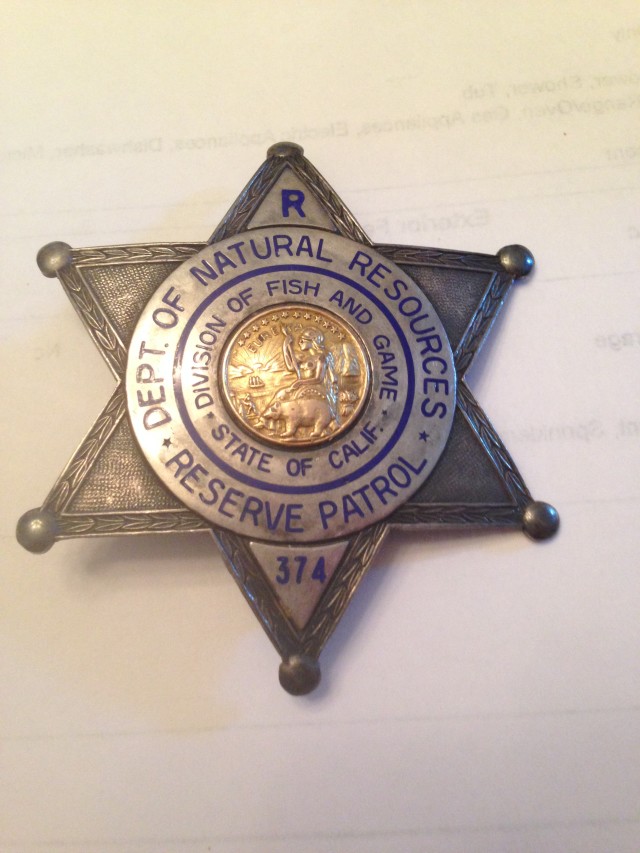 1952. New badges were issued to Wardens, Deputies and Reserve Wardens.

1955.  The number of reserve wardens in Southern California and the Sacramento Valley declined by 25 percent during the biennium. Raising of the requirements for qualification to compete in civil service examinations for the position of State Fish and Game Warden contributed to a degree to the drop in veteran reserves and potential replacements, since the requirements ruled out many of those who hoped to gain a civil service appointment. Despite this attrition, activation of three new reserve units in Central California enabled the force to maintain its strength.

Reserve wardens fill a distinct need in buttressing the work of the Wildlife Protection Branch. This is particularly true of certain critical periods such as opening days of various seasons and heavily pressured week ends, when the regular wardens need help. Applicants desiring a commission as a reserve warden must attend weekly training classes for 10 weeks and pass an examination before gaining an appointment. Receiving neither salary nor expenses, they
team up on their tours of duty with regular wardens. Failure to conduct himself with consideration, courtesy and helpfulness toward the public is justification for immediate dismissal of a reserve from the program.

By terms of their appointments, reserve wardens are required to perform one tour of duty a month. Generally this service is conducted on a week end, although many reserves generously donate time far in excess of requirements. Consideration of the personal expense borne by each reserve warden leads to the conclusion that the ranks are filled only with men who are genuinely interested in the welfare of California’s fish and game. At the close of the biennium 11 reserve Warden units, comprising 242 men, were active within the State. Units were located at Sacramento, Stockton, San Francisco, Fresno, Sonora, Tulare, Merced, Bakersfield, Los Angeles, Terminal Island (marine) and San Diego.

1956. Units of reserve wardens contributed thousands of hours of their time and performed invaluable service in enforcement work during the biennium. Working with department wardens, the unpaid reserves enabled regular patrols to cover greater areas and resulted in a more thorough check of hunters and anglers. In many areas where it was suspected that violations were occurring, reserve wardens were assigned to out of uniform patrol and surveillance, and succeeded in bringing a number of violators to justice. These men also devoted many additional hours to the hunter safety training program, conducting classes for junior hunters and teaching them the proper use of firearms by practical instruction on rifle ranges. With the addition of a new class of reserves in the San Francisco Bay area during the latter part of the biennium, the department now has a reserve force of approximately 277 men.

It’s great to read the history of those who preceded quite a few of us as Reserve Wardens.

I can add this from my own experience: I applied and was appointed a Reserve Warden by Marine Region Inspector Russ Goodrich through Warden Jim Barton in Morro Bay in1982. Jim already had Reserve Warden Todd Tognazzini on his team. Shortly thereafter two others were appointed in San Luis Obispo County- Dean Hileman and Mike Buelna. We all focused on marine patrol, trained jointly with Lieutenant Bob Koch and his Region 3 squad, and assisted during deer seasons as well. Our Lieutenant was Dan Laughlin of Monterey County, who later promoted to Captain of the P/B BLUEFIN. Our Reserve coordinator was then-Lt. Tom Belt at R3 HQ in Yountville. He promoted to Captain as well.

A neighboring Reserve was Sean McRae of Hanford, who worked alongside Warden Kathy Ponting.

All of us aspired to become Game Wardens, and succeeded, with the exception of Sean. I believe we all tested multiple times and were on lists that numbered up to 1,000 applicants. It seems that typically only about 10 were hired each cycle. Sean couldn’t wait forever and became a CHP officer. He is currently a Captain/commander in San Luis Obispo and due to retire soon.

Todd was hired as a biologist in Santa Barbara area and became a warden in Paso Robles, where he is currently the SLO/Southern Monterey County lieutenant.

Dean was hired in 1987 from Morro Bay PD as a King City warden. He retired as the San Luis Obispo County lieutenant in 2010.

Mike and I were hired in 1985 and attended the Alan Hancock College Police Academy in Santa Maria. Mike was assigned to the East Bay Area and retired as the Martinez warden.

I was first assigned Potter Valley but that was changed mid-academy to Salinas. Partly because we all had extensive marine patrol experience prior to being hired, Todd worked on a boat in the Channel Islands and has actively patrolled offshore his entire career. Dean was also assigned marine patrol in Morro Bay and aboard the BLUEFIN. Mike operated a skiff on San Francisco Bay, and I patrolled offshore Monterey and Santa Cruz , ultimately replacing Dan Laughlin and Lt Bob Grossi as the skipper of the BLUEFIN from 1995-1998. I concurrently served 4 years as the state enforcement representative on the newly-created Monterey Bay National Marine Sanctuary advisory committee.

As in the information provided by Dale Wong, the influx of boat people from SE Asia as commercial fishermen brought about a heavy workload at sea as we not only enforced regulations but also did our best to educate them regarding fisheries and wildlife management in the U.S.

Upon my assignment to Salinas, I worked regularly with Warden Mike Carion of Carmel Valley who later became Chief of Enforcement. His Reserve Wardens were Geoff Malloway, a teacher and volunteer Hunter Education instructor (who I still teach HEd with), and USFS Law Enforcement Ranger Ray Gould. Ray eventually became Captain over all of the Los Padres National Forest before retirement.

After serving as the first OSPR/Marine Region Captain for Central and Northern California, I transferred to the R3 Central Coast captain’s slot when Capt Tom Pedersen promoted to Chief of Patrol. I retired mid-2014 as Assistant Chief of the North Coast District after 32 years on the Thin Green Line, always having marine enforcement as part of my duties.

I’d say our Reserve Warden program has served, and is serving, DFG/DFW and the citizens of California extremely well!!

I hope this fills in some of the unknowns about our Reserve Warden program.

My best to all our current and retired Wardens,

1983. Two reserves were utilized during the influx of southeast Asians in the SF bay area. Lack of knowledge of the rules and regulations resulted in an increase of regulation arrests of these immigrants from the southeast countries. Working with the court system and southeast work and placement groups, a diversion program was initiated and the arrests soon tapered off with very little recidivism. The reserve officers that help deal with this problem for were, Reserve Warden Ron Dong and Reserve Warden Roger Kellmann. Roger later went on to be a Fremont police officer and later as a detective. Ron continued with his acupuncture practice in SF.